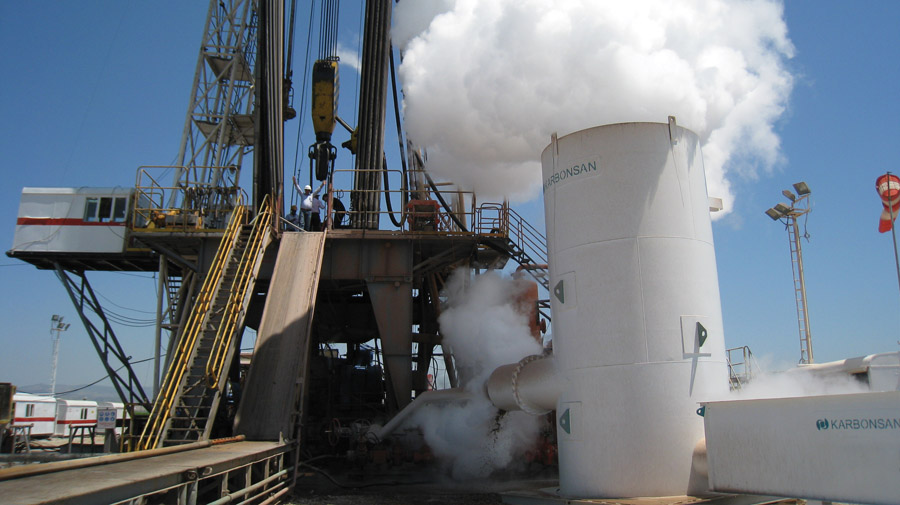 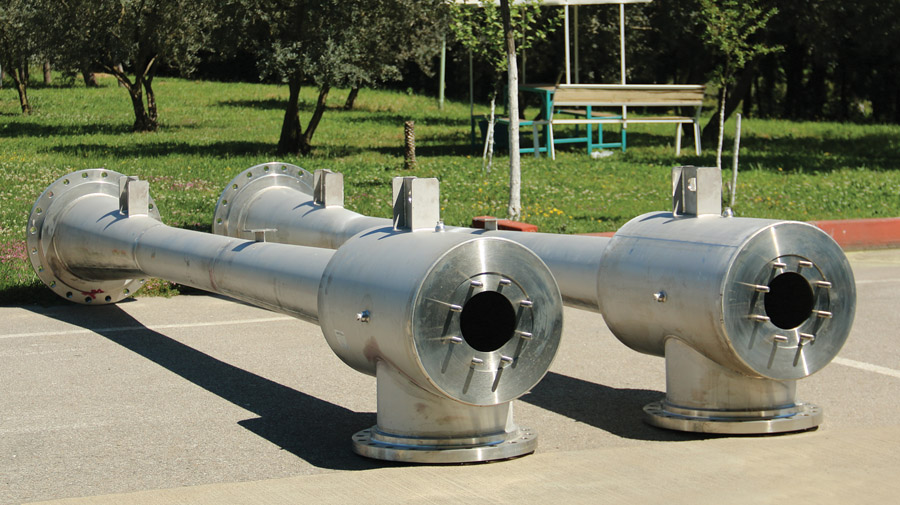 Many of the traditional and basic requirements of the production plants remain the same regardless what the power generation is derived from.  Karbonsan is keeping pace with the demand for high-tech systems and equipment and can provide the know-how and technology to fulfill your project’s requirements. Karbonsan provides detailed engineering for all geothermal systems. This includes separation plant (vessel design, silencers, pressure reducing station) and overland piping (two-phase and reinjection).
Karbonsan manufactures various equipments for service providers, drilling companies, hydro and geothermal power stations. These includes the supply of all types of storage and process tanks, tube-and-shell heat exchangers, steam jet ejectors, flasher/steam seperators, piping systems, condensers, SCADA instruments and control systems, silencer and weir boxes.
Well heads
Well heads are the concrete cellars and equipment first used to support the drill rig while drilling or working down the well.  Well heads are used to support valves and separators that control the flow of water and steam from the well.
Karbonsan can manufacture casing housing, flanges, adaptor spools and expansion spools for well heads.
Steam Separators and Condensers
Karbonsan manufactures separators and condensers for geothermal and other industrial uses. Generally speaking, the condensers are used to condense the heat-depleted steam exhausted from the turbine and the seperators are used to separate dry steam and hot water.
A typical, conventional open cycle geothermal power plant comprises a production well producing a mixture of saturated steam and hot brine, the mixture being applied to a separator which separates the saturated steam and non-condensable gases from the geothermal liquid.
The saturated steam and non-condensable gases produced by the separator are supplied to a turbogenerator which extracts heat from the steam and produces power. The heat-depleted steam exhausted from the turbine is condensed in a condenser supplied with cooling water from a cooling tower to which exhaust steam from the turbine is supplied. As a consequence, water vapor and non-condensable gases are vented to the atmosphere. The hot brine produced by the separator rich in minerals such as silica, is collected and conveyed to a storage area by conduits. All the noxious gases contained in the portion of the geothermal mixture directed by the separator to the turbogenerator are released to the atmosphere.
Some geothermal fields contain mainly pressurised water. However when this water reaches the surface, the pressure on the water drops and the water boils as it rises within the well to become a mixture of about 80% water and 20% steam. Only the steam can be used to drive the turbines so the water must be separated. The water from the separators may then be discharged or passed to a flash or binary plant depending on its temperature and pressure.
The separation technique used at Karbonsan is the principle of centrifugal force.
It relies on:
The steam and water mixture entering the separator at high speed and at an angle.
The water having a greater mass than the steam, so that it spins to the outside.
The lighter steam molecules collecting in the centre. They are then piped up and out to the power station.
Silencer and weir box
A silencer reduces the noise of steam escaping into the atmosphere.
Silencers are needed because of the noise originating from the pressurised hot water escaping to the atmosphere and producing flashed steam. Without a silencer even a small steam discharge could cause deafness, headaches, and dizziness in people working nearby.
Within the silencers there is also separation of steam and water along with the production of massive clouds of water vapour.
A well output is most accurately measured by the separator method. The well is discharged into a separator. The steam phase is measured in a steam pipe using an orifice plate or Annubar, and the water is measured by a weir plate in a weir box at the silencer. The water flow rate needs to be corrected for that flashed in the silencer. Karbonsan designs silencer and weir boxes to get efficient reduction in the noise, flow rates.
Steam jet ejectors
Vacuum ejectors are used in a variety of applications in the process, food, steel and petrochemical industries. Typical duties involve filtration, distillation, absorption, mixing, vacuum packaging, freeze drying, dehysrating and degassing. Ejectors will handle both condensible and non-condensible gas loads as well as small amounts of solids or liquids, however accidental entrainment of liquids can cause a momentary interruption in vacuum but this will not cause damage to the ejector.
Karbonsan manufactures steam jet air ejector systems. Steam ejectors provide vacuum in many process industries and utility companies as well as geothermal power stations. Combining low capital cost, simple operation, high reliability and the ability to handle large volumes at very high vacuum levels, they can be optimized to contribute to process enhancement and operational efficiency.
Power Generation Equipments - KARBONSAN BASINÇLI KAPLAR SAN. ve TİC. A.Ş. Cryogenic Tank
Power Generation Equipments - KARBONSAN BASINÇLI KAPLAR SAN. ve TİC. A.Ş. Cryogenic Tank Aytemiz Group of Companies has activities in geothermal exploration and power generation field, as w
power-generation-equipments-cryogenic-tank-pressure-vessel-basincli-kap-lng-lpg-cryogenic-tanks-lng-carrier-lng-systems-regasification-terminal-karbonsan